I was writing up my research notes at 7.30 this morning when I decided it was time for a day off.  A couple of new guests have arrived, and I offered to share my hard-won knowledge of Accra. So we set off for the national cultural centre, a place where you can buy crafts, hear local drumming styles, etc. It was a bit crazy there – it’s the only tourist market in the city, so people grab you and give you the hard sell. My friends took a drumming lesson, and I learned to play the Ghanaian castanets, small gourds filled with seeds, connected by string, that you fling around in intricate ways to make different noises. I got into a conversation with a guy there about migrating – he has lots of friends who are going to Europe the hard way, through the Sahara and by boat to the Canaries or to Italy. He introduced me to a friend who had tried, but had been turned back three times by Libya. He described the trek over the mountains from Algeria into Libya, where you hide out and wait for a few months for a boat to take you across the Mediterranean. It costs around $3,000 to get smuggled to England from Ghana at the moment – a little less than it costs to be smuggled from Mexico to the US. He told me that when you’re on the bus on your way to the mountains, you’re passing a constant stream of thousands and thousands of people coming back the other way, having been found and deported. It must take a lot of optimism to try it. He says poor Ghanaians are fatalistic about the odds: “someone has to survive, so you go and hope it’s you.” He also said he was happy he’d tried to get to Europe, and that he’d learned a lot about the world from his travels. He likes Libya, he’s not sure about Algeria, but finds it all pretty interesting.

We saw a great traditional pharmacy at Nkrumah Circle today: 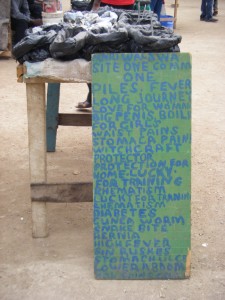 On from there to Osu, where we had some lunch, bought some presents for people at home, and headed out to Kaneshie market to find kente cloth.  While we were inside, there was the most incredible rainstorm so that when we emerged everything was flooded. Accra floods regularly and so badly that people actually drowned in the city last rainy season. We got in a bus heading home, but it got stuck in an almighty traffic jam, which turned out to be because all the roads were so deeply flooded cars were breaking down all over the place. No one could get out of the bus for the water, so it turned into a shouting match between the passengers and the driver about how he should get us out of the jam. At one point he started to climb out of the window, but there was such an uproar that he climbed back in again. It was like a football match.

Finally we got to the junction where we had to change to another trotro, and found there were about 2 feet of water between us and the road home. 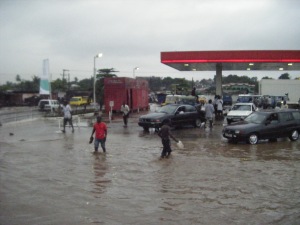 Apparently this happens every time it rains. People just wade around for a while, then the cars can get through and everyone goes home. Life goes on. It’s why no one aims to make appointments on time in this town.

← signs of the times
Friend and superfriend →