You can’t get there from here.

The last two days, with Tamale interviews nearly done, I have been on the road. And off the road, on dirt tracks. And off the dirt tracks, hiking around the bush way, way off the map. It’s been interesting. Useful things I have discovered are that in Northern Ghana, you can drink 8 pints of water in a day and not need to pee. Also, that most of the backroad buses here have no brakes – they just change down through the gears then use the handbrake, where there is one. And hope no cattle cross the road.

So, yesterday I took the 5am bus from Tamale north to Walewale, where I met a great IT teacher called Gerard who has a smart board (electronic blackboard) and about 30 computers, and provides connectivity to the whole community. CISCO funded the computer lab with NEPAD and the Ghanaian government for the first year, donated the hardware and a satellite connection, then shut them down at the end of twelve months (way to wind down an intervention sustainably, NEPAD!). So now he has to figure out how to get it reconnected and make it cover its own costs. Very cool guy though, I hope he succeeds. Hitched a ride on his motorbike down to the bus station, then east out to Gambaga and Nalerigu,  about a hundred miles away, where the transport ends. A guy called Aboyinga has set up an internet cafe here with the best connection I have found yet in Ghana (no one else is competing for connectivity that far out). In Nalerigu, I was finally able to back up my data by sending it to my email account. Getting there took 6 hours, coming back only 3 because somehow I got a direct bus from outside the internet cafe. 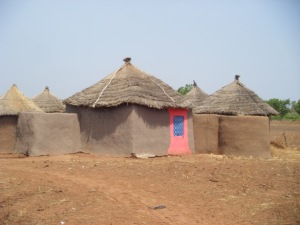 People out here live in scattered savannah villages, in compounds with huts made of mud brick and thatch. Pretty much all the families out here are subsistence farmers, and it’s rough trying to scrape a living. It’s dry, there’s only one growing season a year, unlike down south where there are two. So people are about to go through their hungry season, which will end around June with the rains. Everyone is tired of the heat, they don’t want to do anything or go anywhere. I agree. But mangoes are in season, so not everything is bad.

mangoes are finally in season

Made it back to Tamale last night at 6, ate something and was asleep by 8. The heat during the day is so intense (it gets up to around 110 degrees, in the high 40s) that it just tires you out. Today I got up around 4 again, with the temperature only in the mid 30s, and took the bus out to Yendi. I had spent a while yesterday deliberating about how to stay the night where I was and get a bus to Yendi from there, it’s about 100 miles south, but it turns out you have to go through Tamale so all my debating was wasted.

Yendi has an internet cafe, but when I called the owner, Kombat (great name – maybe he’s from Brooklyn) he was in Tamale so we agreed to meet there at the end of the week instead. I have to go to all the cafes anyway, to mark them with GPS for the map I’m going to make, so it wasn’t a wasted trip. Then on to Saboba, on the border with Togo. Two hours on non-roads, where the red dust works its way into your hair, your clothes, your ears, anything that’s not zipped up, and never comes out again.

Saboba has internet, but it’s nonprofit and run by Worldvision, and therefore not eligible for my project. However, I got an interesting interview with the guy who runs the service there, and he told me the other towns where they operate, and where there is no other service, which saved me a day’s travel at least. So it was worth it. Then I discovered that there is only one bus a day out of Saboba, and it goes at 9am. Cecilia, who I had met on the bus in, had called her husband Thomas who kindly gave me a ride on his motorbike out to the internet cafe. When I got back and was stranded, they started calling people to see if anyone could give me a ride. Thomas apologised for not giving me a lift back to Yendi himself, but said he had typhoid and was still recuperating. It turns out Cecilia had had it too, as had their little son. As I mentioned, it’s tough for the people here. So I agreed with him that he should probably stay home. He kept calling though, until he found a student of his from the local high school, George, who was going to Yendi that afternoon. So I hitched a ride with him. In a skirt. At noon. My legs are a lovely shade of English red, but I made it back to Yendi in the end. Then an hour’s wait on the bus in Yendi until it was full (drank 3 pints of water during that one) and a ride back to Tamale with the hottest people in Ghana, who had also spent the day travelling around, doing business, and were as exhausted and dehydrated as me. But at least I’m not in Togo.

1. You can’t get there from here. Do not attempt to do anything clever involving a map – 50% of the roads it shows don’t exist. Go to the biggest town you can find, and take the bus from there, even if it’s a hundred miles out of your way. Literally.

2. Get takeout breakfast if you are in a hurry, but don’t get the tea to go. You will end up in a trotro on a pitted dirt road with a plastic bag of boiling liquid which you are expected to suck out after biting a hole in it. It’s lucky my computer case is waterproof and Ghanaians are very tolerant of spills.

3. All informal bus services are the same, everywhere. The fights here about where to stop and whether you can bring your chickens/bike/massive tub of semi-preserved fish are the same as the fights on the Chinatown bus to Boston. And someone always has the wrong ticket and won’t admit it. The only answer is an ipod turned up really loud.

← lights out
beer is a food group after today. →